Below is our recent interview with Maximillian Bradshaw from Chronoscope Studios:

A: Chronoscope Studios is a brand new video game company operating out of Charlotte, NC. We have a passion for developing engaging multiplayer focused games where players can build engaging communities and experiences. Our first product targets mobile devices as it’s the most common gaming platform out there, it felt like a natural fit to introduce ourselves to the world. After the successful conclusion of our upcoming Kickstarter we hope to hire a full team to round out our development studio.

Recommended: How The Scope Of Microsoft Azure Keeps Expanding

A: Voidbound: Beyond Survival is a mobile MMORPG survival game, one of it’s most exciting features is how easily players can play with their friends in real-time engaging combat. Players are able to customize their characters and build their own encampment. Our game takes inspiration from games like Diablo; for both it’s top down Action-RPG perspective, and combat style with engaging combat and telegraphed abilities, as well as more popular MMO’s like World of Warcraft where we hope to provide challenging boss encounters and a deep and robust crafting and item system. We’re excited to get our game in the hands of players and having them explore and discover the world of Eluria.

A: We’re launching a Kickstarter campaign before the end of march that will help us raise the remaining funds needed to host global servers and provide a larger Beta test group that’ll allow us to test out server stability and improve on our back-end architecture. Backers will receive unique in game rewards like items and premium currency, as well as exclusive badges in game that’ll signify them to the community as a founder of Voidbound: Beyond Survival. Our highest pledge package will actually allow the backer to help us design a unique boss fight to add to the game, complete with their lore, abilities, intended strategy to defeat, and loot tables. The backer will also be granted the in game blueprint for the boss’ accessory, allowing the player to mimic one of the boss’ abilities in combat.

A: Our mission at Chronoscope Studios is to create the most engaging survival MMORPG on the mobile market. We have plans to expand the social features of the game, including player guilds, which will include guild progression, quests, PVE and PVP events and more. We plan to add more locations for players to visit, more variety in the encounters they face, including puzzles and hidden secrets to solve and uncover. We plan to expand on our item and stat system so players have more distinct ways of customizing their game play experience. 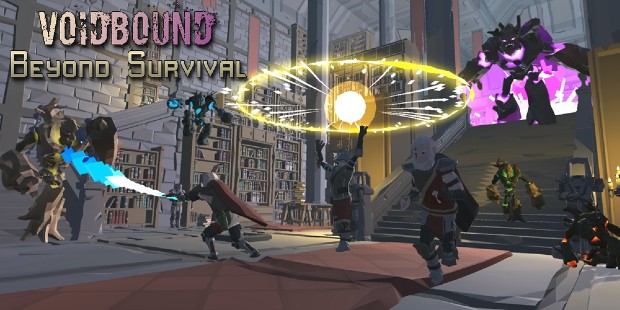 A: We’re making games for gamers, by gamers. Players will not just be along for the ride, we want to build a community that can help build our games with us through feedback and suggestions. This is even more pronounced with our development team, the next great video game idea may rest in the mind of one of our employees, and we want to create an environment where those can be expressed and profited from as a partner. We’re excited to see where this journey leads us, so come venture with us into the void!