Below is our recent interview with Alec Beckman from Bitcoin Green:

Q: Alec, could you provide our readers with a brief introduction to Bitcoin Green?

A: Bitcoin Green is two things: first and foremost, a campaign to raise awareness for sustainability issues arising from the proof-of-work consensus commonly used in public blockchain networks. Secondly, a cryptocurrency that is dramatically faster, cheaper, and more scalable than Bitcoin in its current form. Nearly all of Bitcoin’s limitations and problems, i.e. high network fees, slow transaction times, massive energy consumption, frequent hard-forks that destroy network effects, etc., all stem from the network’s outdated SHA-256 proof-of-work consensus algorithm. We solve these problems by using proof-of-stake with masternodes to secure the network, instead of proof-of-work. As an awareness campaign, we will be educating the public on the problems of proof-of-work and the benefits of proof-of-stake through future blog posts, partnerships, documentaries, talks at environmental and blockchain conferences, and many other means. Bitcoin Green uses a masternode governance mechanism whereby holders of the coin will vote on critical design decisions to prevent centralized governance problems that lead to hard-forks. Since we use proof-of-stake, all of Bitcoin Green’s network inflation, i.e. freshly minted BITG, flows to the holders of the coin instead of third-party miners. This means that anyone can mine Bitcoin Green, without the need for specialized computer hardware. Right now not many people know exactly how and why proof-of-work is bad. Even fewer understand how proof-of-stake solves those problems. We aim to change that and bring the technology mainstream. 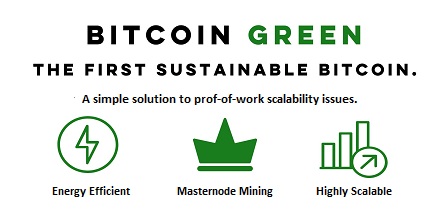 Q: How is Bitcoin Green funded?

A: The creation and initial distribution of Bitcoin Green was designed to both enable widespread distribution (to benefit from Metcalfe’s Law) and enable decentralized ownership (to ensure long-term success of the governance protocol). A premine was performed whereby 2.38% of the total supply of 21 million was minted by the Bitcoin Green developers. Of this 2.38%, or 500,000 BITG, 80% was distributed to the earliest supporters of the network. From this 80%, or 400,000 BITG, each individual, including team members, received a minimum of 2,500 BITG and a maximum of 12,500 BITG, with only 2 individuals (the founder and lead developer) receiving 12,500 BITG (less than 0.06% of total supply). Under 10 individuals received 7,500 BITG or more. The maximum inequality between largest and smallest holder was then 5 to 1. Compare this to other “decentralized payment networks” where the founders may retain 10 or 20% for themselves, literally thousands of times more centralized than our structure. The proceeds from this initial distribution is what funds our initial major costs, such as exchange listings. The remaining 20% (100,000 BITG) that was not distributed is designated as the Awareness Fund, which will be distributed in its entirety over the following months and years to individuals enthusiastic about the Bitcoin Green mission. The vast majority of the total supply, 97.6% to be precise, is up for grabs for anyone who holds the coin to stake (or “stake” is the verb used instead of “mine” for proof-of-stake cryptocurrencies).

Q: Where do you see the cryptocurrency market going in 2018?

A: While we won’t speculate on the price of cryptocurrencies, we do believe there will be massive growth in the masternode sector of the market. Right now, most people in crypto just assume mining is something only possible for those with powerful computers, warehouse space, and lots of technical know-how. What they don’t realize is that you can mine without any specialized hardware or technical know-how with proof-of-stake and masternode coins. All you have to do is buy coins, send them to a special wallet program that validates transactions, and you receive freshly-minted cryptocurrency just like a traditional miner. Besides solving all the problems associated with proof-of-work, we believe the ability to receive passive income from your holdings will be extremely attractive to those in the cryptocurrency community. Bitcoin Green aims to lead the front on raising awareness for this powerful technology, since we are the first proof-of-stake Bitcoin implementation.

Recommended: Are You Looking For A New Hoverboard In 2018? HX Phantom Review

Q: What is on the roadmap for Bitcoin Green moving forward?

A: Within the next month, one of our biggest deliverable is our blog series. It will initially be a 3-part series, 1) an intuition-builder for network consensus, proof-of-stake vs. proof-of-work 2) an analytical outline as to why proof-of-stake is strictly superior to proof-of-work and 3) an introduction to the Bitcoin Green project. We will also be kicking off our bounty and airdrop campaign very soon. We will ultimately distribute the entirety of the Awareness Fund to community leaders and participants, so building a community of stake-holders will be a huge part of the project. We also have 2 exchange listings coming up. Keep in mind this project is 2 months old, so a lot is developing and progressing rapidly. You can check out our detailed roadmap.