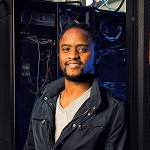 Jason Mars is a technologist and a highly published professor of computer science at the University of Michigan. He co-founded the AI startup Clinc, which develops conversational Artificial Intelligence.

The daily impact of the COVID-19 pandemic is in our face nonstop, whether it be the devastating loss of life or its toll on the economy. But looking to the future, another crisis looms on the horizon that will be caused by an unexpected source — Artificial Intelligence (AI).

Point blank: As companies figure out AI, they won’t rehire all the people laid off during the pandemic. It will catch us by surprise and have a devastating impact to our economy long-term. Out of necessity, companies grew more comfortable with embracing AI to compensate for a reduced workforce. They will continue to do so, exacerbating the economic crisis.

Death or adaptation
Stress causes adaptation, and many major breakthroughs throughout history have come from challenging times. For example, the 9/11 attacks, though tragic, helped inspire new robotics now used as life-saving devices worldwide.

Businesses large and small are under great stress because of this pandemic’s sprawling worldwide effects. Companies are dying on a Darwinian level. Just as this virus has tragically claimed hundreds of thousands of lives, it’s also an extinction event for thousands of businesses.

The harsh COVID-19 environment will lead to either death or adaptation for businesses. Historically, this phenomenon is known among evolutionary scientists as stress-induced mutagenesis or stress-induced variation.

Businesses must thrive by any means necessary, and AI is going to be those means. The process automation and data analyzing ability of AI has been discovered by businesses in automotive, finance, healthcare, bioscience and beyond. And it’s here to stay.

Process automation via AI can shave months off developing key technologies for autonomous vehicles. And extreme data analysis done by AI is essential for most businesses if they want to maximize success of new product launches.

A major disruptor already in play is conversational AI that handles customer service instead of humans. I’ve observed this first-hand through Clinc, a conversational AI company I founded in 2015 that was wildly successful in this space.

I’ve since moved on to work on what I believe to be the next major technological shift in AI. However, one observation I learned from Clinc is that even in a flourishing economy, the market has a large appetite for leveraging AI to automate business processes. In the current COVID landscape, this appetite is only going to grow, and in many cases will be required for survival.

Another Depression?
As noted by our best economists and intellectuals, the Great Depression was not caused by WW1 and the credit/debt crisis (although these events certainly didn’t help), it was unemployment and America’s inability to act fast enough to get people employed that led to its severity.

By not paying close attention to the AI revolution being accelerated by COVID, we risk repeating this deadly economic cycle, and If we’re slow to learn and adapt to this coming phenomenon, we can easily sink into another depression.

To avoid this catastrophic outcome, a wise president would call on our economic and technology leaders in Washington to form a committee to study how AI and other technologies are going to impact the workforce, and implement proper steps to retrain workers and avoid economic disaster.