Servers are the backbone of the internet – and with the number of users interested in having their own place on the internet growing by the day, it becomes more and more clear that owning a server privately can become very expensive. This is where web hosting comes in to alleviate this trouble, with RoseHosting being an excellent example of a top hosting provider.

All of the features of a server can be had with a RoseHosting hosting plan, all without breaking the bank. In my test run with RoseHosting, I used an SSD 1 VPS, which not only performed as well as its competing brands, but also surpassed the level of service that I expected from a typical web hosting provider.

RoseHosting offers a wide variety of options to choose from when it comes to picking out a hosting plan. From shared plans, to VPSes, to dedicated servers, they check all of the boxes when it comes to having the usual types of hosts. What does go above and beyond the competitors however is the extra features that are included with every host. Premium features such as 100% up time, SSD storage, a free SSL certificate, free migration, and weekly backups are all included with every hosting plan.

These extra features are all great add-ons to an already great plan, however, what really makes RoseHosting special is their stellar fully managed support. Also included with every plan, this is what really separates this provider from the rest. A more in-depth explanation of the support as well as my experience with their support can be found down below.

Shared Hosting Plans are the base tier for web hosting – offering a decent amount of power, for very affordable prices. Starting from just $4.95/mo for the SSD Basic plan, they include a very appealing set of features at that price point. If you upgrade to higher plans such as SSD Business or SSD Ultimate, increased performance and resources are added, as well as increased functionality. Something that is a rarity for a shared plan is to have SSD as the baseline for all levels of this hosting tier.

Most competing hosting providers don’t include SSD-tier storage with their plans, meaning RoseHosting’s servers will perform much faster compared to the competition. This, plus the excellent feature set included with these plans makes for an excellent starting point for the budding web developer and sysadmin. 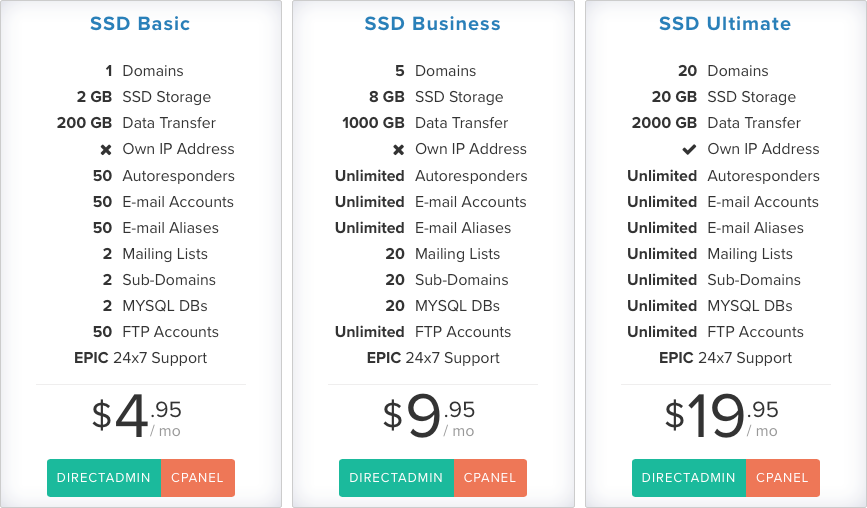 A VPS is, in essence, a shrunken-down virtual dedicated server inside of a physical server. It has its own OS, file system, and users, as well as a root user. Plans starting from $19.95/mo include 2 CPU cores, 1GB of RAM, 30GB of SSD-tier storage, as well as all features found on the shared plans. The higher end the plan is, the higher the performance will be. Speaking of high-end plans, RoseHosting also has high-end VPS plans, for when you need even more power while not quite needing a dedicated server.

Some extra benefits over a shared plan includes root access and superior performance, as well as all of the usual benefits that you get with any RoseHosting hosting plan. It’s worth noting that RoseHosting was actually the first to bring VPS hosting to the public for commercial applications, back in 2001. This makes them the most experienced provider of VPS hosting on the market.

All in all, VPSes are the perfect choice for a conventional blog or personal website, combining both speed and affordability in one well-rounded package. This also includes a copy of DirectAdmin or cPanel, allowing for greater control and management of your server.

A dedicated server is the high-performance choice for when a website or a service must perform with as few hiccups as possible. A dedicated server is used for big projects – having not only the most performance out of all plans, but also the most flexibility and capabilities. And since it’s a standalone server with only one user, it is essentially a real physical server at your disposal. While these are pricier than all of the VPS plans, the performance difference between a dedicated and a VPS simply cannot be compared.

But should you need even more horsepower at your disposal, RoseHosting has high-end dedicated server plans, with upgraded specs over the regular plans.

Of course, all benefits included with the lower tier plans are included with a dedicated plan, including a copy of DirectAdmin or cPanel.

RoseHosting’s flagship feature is not only their excellent hosting options — it’s also their outstanding fully managed support. Having read the reviews all over the internet for their excellent support team, I tried out RoseHosting’s VPS with the knowledge that they could likely fix any issue that I had.

In the month or so that I got to try their SSD 1 VPS, I was experimenting with bash scripting. Having thoroughly trashed my install of Apache, I turned to RoseHosting’s support team for help. They not only fixed my install of Apache, but they also pointed out what was incorrect in the script that I was making – and all of this occurred in less than an hour after I submitted a ticket. This is what managed support should be like – fixing any issue, even if the issue is not related to the functionality of the server.

What separates RoseHosting from the competition is that this level of support is included with all of their hosting plans – even the lowest tier shared hosting plan. Therefore, this makes RoseHosting one of the best options on the market when it comes to choosing a hosting provider based on its support team.

I was very impressed by what RoseHosting brings to today’s crowded web hosting market. With their affordable yet versatile plans, and the amount of premium features included for free, finding a plan suited to you is made very easy. And should you encounter any issues with your server, their support team is industry-leading in speed and knowledge. Altogether, short-listing RoseHosting as your next hosting provider is a very good idea.