John Lee founded Prophecy Development Corp. (“Prophecy”) after working in Silicon Valley in the late ‘90s dot com boom and bust. He had been an investor in the junior resource space after he semi-retired in Vancouver, Canada. You cannot be in Vancouver and not be involved in the junior resource space. In 2009 John took the opportunity to start Prophecy, raise over CAD100 million through the Toronto Stock Exchange, and acquire some of the assets he knew well through his personal investments to consolidate them under Prophecy. Through the process Prophecy has acquired vanadium assets in Nevada and Canada, a silver-zinc-lead project in Bolivia and other assets in Mongolia. In 2017 Prophecy saw a good opportunity in vanadium and really jumped on the wagon to acquire their flagship Gibellini property in Nevada. Vanadium prices have really rallied this year and since Prophecy acquired Gibellini, the vanadium pentoxide (V2O5) price has increased by around 400% from its 2016 low to trade at between $9 – $10/lb today. Prophecy believes they have an edge with the grade and the host rock at their Gibellini project, as the mineralization has a low content of deleterious elements. The deposit is amenable to open pit mining and the mineralization appears to be amenable to heap leach methods without an initial roasting step to produce V2O5 as a bagged product on site that meets the specifications for high-tech applications such as vanadium flow battery technology, considered to be a game changer for large energy storage grid systems.

Below is our interview with John Lee, CEO and Chairman at Prophecy Development:

Q: What makes vanadium batteries better than lithium-ion ones?

A: There is no contest that vanadium batteries are superior to lithium batteries for large energy storage grid systems for a number of reasons.

First let’s look at size requirements. Lithium batteries store their energy in cells whereas vanadium flow batteries store their energy in tanks. The lithium batteries are small self-contained devices and you need hundreds of thousands of them to make a grid scale storage system work. Compare that to vanadium batteries that scale up easily to industrial size applications by making the tank bigger. It works better and it doesn’t add a lot of cost. When the size of a lithium system doubles, the price doubles as well.

Then there is the issue of cost. Bloomberg New Energy Finance estimates Tesla’s current battery costs are ~$150 to ~$200 per kilowatt-hour – well below the industry average pack costs of ~$350 per kilowatt-hour. Vanadium battery costs are slightly behind the curve at $300/kWh to $500/kWh, however those costs are half of what they were 3 years ago and set to come down further. On a large scale deployment, vanadium flow batteries may be more competitive as they can be stacked up to increase storage capacities thereby decreasing the unit cost, whereas lithium-ion storage capacities are somewhat boxed-in by initial design thereby increasing the unit cost for lithium-ion batteries.

Grid energy storage batteries need to last for decades. Vanadium flow energy storage systems have estimated lifespans in excess of 10,000 cycles and maintain 90% of their capacity over 20 years thereby lowering the total cost of ownership. In contrast, getting 1,000 cycles of use out of a lithium-ion battery with full depth of discharge would be ambitious. As such, lithium ion batteries have a finite life, so not only do you need thousands of expensive cells, the performance degrades over time with changes in heat, operating conditions and how often they have been discharged. A more serious issue is that lithium batteries also are subject to “thermal runaway” reactions which means they can blow up. Vanadium-based systems are made for industrial scale applications and they are safe from the danger of thermal reactions.

As vanadium flow batteries have several advantages over lithium batteries for large energy storage grids, there have been a number of recent large vanadium based energy storage installations in the U.S. In 2017, Utility San Diego Gas and Electric and Sumitomo Electric unveiled of a new pilot vanadium redox flow battery storage project in California which will provide 2 megawatts of energy, enough to power the energy equivalent of about 1,000 homes for up to four hours. Other large vanadium based energy storage systems have been installed in Hawaii, Washington State and in New York which has installed a 400 kilowatt-hour array of vanadium redox flow batteries in downtown Manhattan.

Q: What projects are you currently focusing on?

A: Our flagship project is the Gibellini in Nevada which Prophecy acquired this year. Prophecy is aiming to be the first operational primary vanadium mine in North America that could potentially produce vanadium by 2020. There’s not an active vanadium mine in North America today. Gibellini’s prior operator invested approximately US$20 million in permitting, engineering, and feasibility studies since 2009 and Prophecy is planning to continue and complete the permitting process on the Gibellini deposit possibly by 2020. The Gibellini deposit has measured and indicated resources (129.28 million pounds V2O5) amenable to open pit mining and potentially to heap leaching, a major cost reducing factor. Prophecy’s Gibellini mineralization also contains few deleterious elements so that high-purity 99.9% vanadium pentoxide can be produced with environmentally friendly processing methods and at extremely low cost.

Q: What Makes the Gibellini Project Standout from Other Vanadium Prospects?

A: At Prophecy we have an eye out for tier one projects in politically safe jurisdictions which is why we’ve focused on the United States. We saw a good opportunity earlier in 2017 to acquire the Gibellini vanadium project in Nevada and the timing was right for this acquisition. Installations of large scale vanadium base energy storage systems are increasing in the U.S. Nevada is one of the best jurisdictions in the world to develop a mining project as per The Fraser Institute, a Canadian independent public policy think tank. Nevada is also an old historic mining state with easy access to road, water, power, and labor, and environmental permitting is straight forward. Gibellini is one of the few pure vanadium projects being developed in North America right now. The Gibellini deposit is unique as the deposit is hosted in a black shale which is low in deleterious items (less than 1% Fe, Ti, MgO) and is amenable to heap leaching without an initial roasting step to produce V2O5. This is a major advantage in terms of significantly easier environmental permitting and lower capital costs and that the process can produce high-purity vanadium pentoxide for battery, aerospace, and other hi-tech applications. Most of the vanadium in the world is found as a bi-product of uranium mining and vanadium is also found in deposits of phosphate rock, titaniferous magnetite, uraniferous sandstone and siltstone. This makes the Gibellini Project one of the most attractive pure vanadium developments in North America. 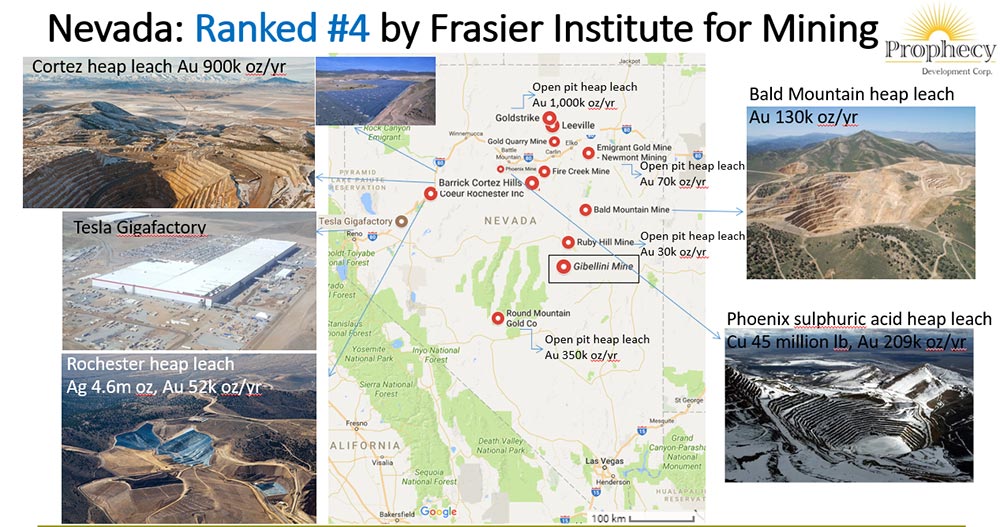 Q: What is the outlook for the vanadium market and price?

A: In November 2016 the price of vanadium pentoxide (V2O5) was $4/lb.; since then, V2O5 prices have more than doubled to over $11/lb. In addition to the depletion of ground stock inventory, in 2017, the vanadium market underwent key structural supply and demand changes which have the potential to force a much higher vanadium equilibrium price in both the short and medium term. The factors impacting the price of vanadium include the current environmental inspection drive in China; the Chinese government scrap import ban coming into effect at the end of 2017 and potentially removing approximately 6% from the Chinese vanadium pentoxide production each year; a revision to the standard tensile strength of rebar products in China which forecasts vanadium metal consumption in the country grow to 30%, and an increased number of high-tech applications such as vanadium redox batteries.

A: The vanadium turnaround was, and still is, a notable event of 2017, and Prophecy is well positioned for the next wave of commodity price increases.

During the next 12 to 18 months Prophecy is focusing on project development to move our Gibellini and Pulacayo projects towards production. The Gibellini project had a feasibility study done by the previous operator who had spent approximately $20 million on permitting, engineering, and feasibility studies since 2009. Prophecy will amend the feasibility study to make it current and work towards getting this project permitted. We are looking at a potential timeline to production in 2020.