Below is our recent interview with Jason Cozens, CEO at Glint Pay:

Q: Could you tell us your story and something more about Glint Pay?

A: Of course, to get it in a nutshell: Glint is a digital payments business that enables gold to be used as a global currency. It utilises the Mastercard global payment system with a single smartphone app and offers multi-currency capabilities. The Glint app is available on iOS in the App Store and on Android.

We founded Glint as we both shared similar views on the erosion of the value of money and the need to use gold as a means of preserving value and purchasing power.

I am a 20 year veteran of the E-Commerce technology sector and founded Visuality when email marketing and virtual reality were in their infancy. Following the beginning of the financial crash I founded GoldMadeSimple.com that helped clients buy and store physical gold securely. My co-founder Ben Davies has over 20 years’ experience within international financial and commodity markets. He is the former head of trading at RBS Greenwich and co-founded Hinde Capital in 2007, an alternative investment management company specialising in precious metals.

We founded Glint because almost without exception people around the world recognise that paper money, i.e. currencies used in the financial system and the global economy aren’t healthy. This is because they are manipulated by inflation – in both the long-term and the short-term: in the UK the pound has lost nearly 30% in the last 10 years. In Turkey the lira has lost 38% of its value against the dollar in the last 8 months. Additionally, that inflation is largely due to money printing and essentially, we are in a period of high systemic risk from high levels of global debt to finance that.

Gold is revered across the world and in many cultures, India and China in particular, gold is already recognised as the true form of money with intrinsic value but until now it hasn’t been possible to use it in the electronic and mobile payment system.

Glint has married technology with the oldest form of money, gold. Users can now spend gold as currency anywhere in the world – to buy a coffee, a car or a house, with sound money.

In any economic climate, gold is both a stabiliser and equaliser of value. That appeals to anyone who is concerned about the erosion of their money through inflation. In essence, when people ask for more money what they really want is their money to buy them more.

The rise of cryptocurrencies has demonstrated the desire for other means of exchange outside the fiat currency system. Unlike cryptocurrencies, gold is far less volatile and a better storage of value.

In short, Glint has introduced gold as money to spend as a currency via an account and app-based technology. Since launch, we have exceeded the original beta target of 20,000 registered. 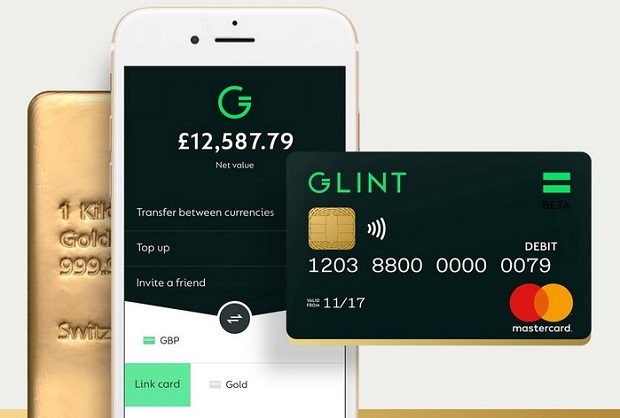 Q: What are the biggest benefits for the users?

A: Customers can use gold as a reliable form of money; to spend, save and transfer – which until we introduced the Glint card in 2018 was not possible.

The benefits of gold are historic. For example, an ounce of gold 2,000 years ago would have bought you a toga, and an ounce of gold in 2018 is about £950 which would buy you a good men or women’s suit. Where consumers really benefit is through the lack of volatility over short periods of time and how it preserves your savings from the ravages of inflation.

Wage inflation has been static in the last 10 years, while the cost of goods and services has increased by nearly 30% since 2008 (source: ONS). £100 in the bank would need to grow by an average of nearly 3% to keep pace with inflation (based on ONS RPI figures 2018). Using gold negates all of these concerns.

As well as gold, customers can now hold, euros and US dollars, along with sterling in multi-currency wallets, all through a single Glint account. All these currencies can be spent through the global Mastercard network using the Glint card. We give you the interbank rate on FX with a small fee of 0.5% on top.

Q: You have recently raised £2M, could you tell us more about it?

Since inception, we have raised over £7.5 million seed money from private and institutional investors.

Q: What advantage does Glint Pay have over its competitors?

A: Glint is a truly unique proposition which can be differentiated from other gold-based payment systems. We have developed a means to pay with gold through a frictionless payment system via MasterCard which means it is universally accepted. We are the only provider in the world which enables consumers to pay with gold using a real-time market price and the ability to transact at the point of sale.

Q: What is your main goal at the moment?

A: That’s a great question. We obviously want to grow the business for Glint to re-establish gold as a mainstream form of reliable money in the UK and globally. But the real implications of that goal are what myself, the Glint team and our investors are passionate about. If everyone has the ability to use gold as money we could free people everywhere from the wealth erosion inherent in inflated paper currency. Using the sound money of gold gives everyone a better chance of prosperity.