In an industry that continually throws up new terms, you can be forgiven if you are not familiar with one of the latest: “curated investing”.

Indeed, the very idea of trading stocks online is foreign territory to many, if not the idea of foraying into this gold-studded minefield itself. Investing in securities and coming out in the black, whether modestly or considerably, can be daunting and intoxicating at once, the principles involved, and the savvy needed to profit from them, elusive to the layperson. That this domain has however opened to the private investor, and opened wide, is anything but breaking news, although many of the pitfalls of a headlong rush remain tenacious companions.

Brothers Manuel and Dominic Heyden, founders of Cologne-based neobrokers nextmarkets, are more than aware that, parallel to the rise in interest over the last few years in venturing into this terrain, neobrokers have flooded the market. Hence, an innovative approach would be vital in enabling them to both bring smaller private investors into the fold as well as stand head and shoulders above the crowd. 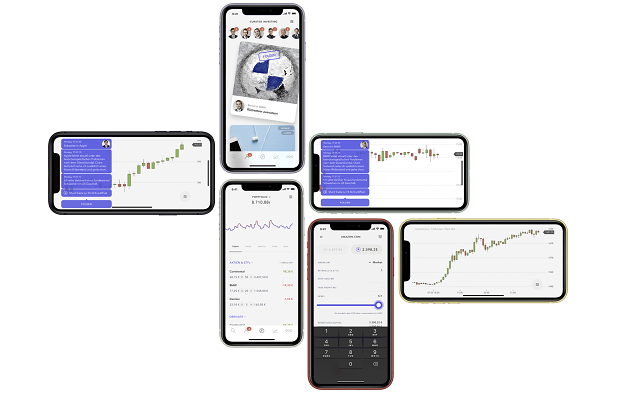 Here, the company has addressed a modern problem: advances in technology often leave us feeling curiously omnipotent but abandoned. In the words of MIT professor and author Sherry Turkle, we have come to expect more of technology and less of each other. That the two positions are not mutually repellent is a cornerstone of nextmarkets’ business model. Far from being solely an online trading platform, the company sees itself as a tripartite force. Easy, barrier-free access to stock market trading through advanced technology is complemented by its further functions as both market analyst and exchange coach. The latter offer is of particular significance: investors, especially those new to the game, commonly experience either bewilderment or an inebriated exhilaration, both of which can lead to rash, ill-advised decisions. The nextmarkets concept is to provide coaches, over a dozen of them, in an innovative manner for just such circumstances, so that the ride is free of unnecessary bumps. The neologism to describe this innovation: indeed, “curated investing”.

While this tri-pillared vision gives nextmarkets three strong legs to stand on, offering further features adds both liberation and stability to the platform. Fractional trading—being able to purchase a portion of a prohibitively expensive share in a company—is an additional enticement. Leveraged trading is also available to those interested; indeed, up to five times leverage for almost all of the platform’s offered securities. Their Money Market CFDs aim at deriving benefits from differences between US and European interest rates.

Perhaps of greatest interest to the potential customer however are the trading fees involved— none. Customers enjoy access to over 7,000 securities and 1,000 ETFs without having to risk a penny. Still, since a gift horse should always be looked in the mouth, and as deeply as

possible, this begs the question of how this benevolence is feasible. Manuel Hayden explains that becoming Europe’s commission-free broker is a direct result of nextmarkets’ high level of automisation, alongside a kickback from the marketplace utilised for the transactions. Voilà: technological advance leading to reduced red tape, without the often accompanying side- effect of being left to wander in a digital wilderness.

The lower-case-styled nexmarkets has expanded beyond its Cologne base, adding Malta to its office locations and further becoming active in the UK in 2019. Their staff currently numbers 35—a perhaps modest number for a company that has the backing of such venture capitalists as Peter Thiel and Falk Strascheg, as well as the publicly listed FinLab AG. Less that is, as so often proved, decidedly more.