If you look at platforms like Twitch or YouTube Gaming, you will see: Gamers are everywhere. Occupying a 105-billion-dollar market share, with more than 2.2 billion players all over the world, video games have become so popular, that they surpassed film industry and became the world’s number one entertainment. Viewership for eSports is surpassing that of many traditional sports.

Gaming industry has exploded in the recent years riding on the wave of min potent emerging trends: the omnipresence of mobile, the evolution of the gaming business model and the growing popularity of eSports. According to forecasts, the revenue of the gaming industry will reach $115 billion by 2018 and by 2020 will approach the $130 billion mark.

Play2Live specialists have gathered the most up-to-date figures for the markets, as well as the most potent industry trends.

Founded in 2017, Play2Live is a trailblazer in merging revolutionary blockchain technology and streaming services. The full-blown ecosystem for eSports and gaming industries is focused on content generation and practical needs of streamers to provide a completely new level of virtual interaction. Play2Live comprehensive solution hosts over 25 functional modules, 15 of which allow generate revenue for all users and at the same time provide an opportunity to spend earned tokens within the platform. Play2Live has a very dedicated international team onboard — it is run by expertized people from gaming and eSports industries as well as prominent tech folks with high-grade projects in their portfolio. Below are the numbers describing 2017 in gaming industry.

eSports is one of the most dynamically developing segments of the gaming industry. By 2020, the market is expected to reach $1.5 billion. Millennials contribute significantly to the overall growth of eSports market. The existing users of streaming platforms are willing to spend their time and money in exchange of the new products and solutions, constituting a lucrative target audience for many brands worldwide. 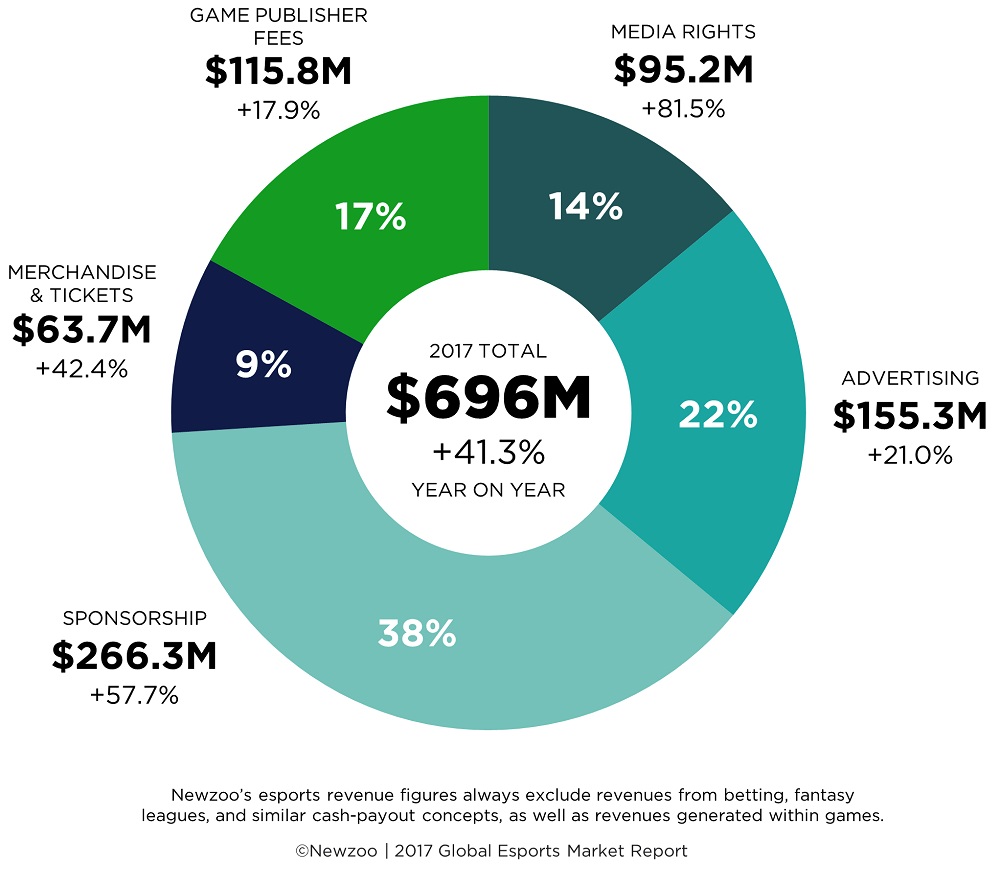 Classic sports and eSports industries are already comparable in terms of the revenues and fan base. 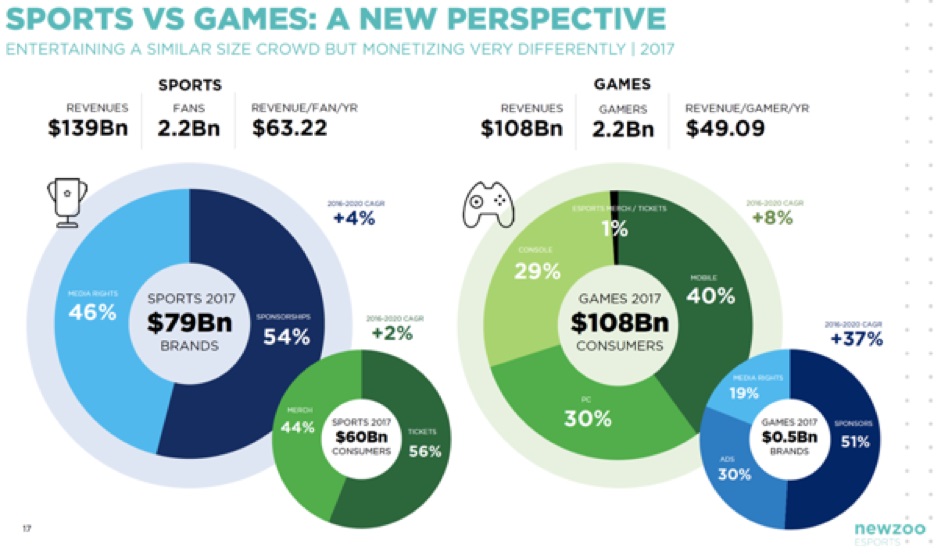 Absolute numbers for viewership of eSports tournaments versus traditional sports audiences are almost similar. Gaming and eSports have opened new channels of communication for viewers such as live streaming platforms for gamers. According to Superdata, live game content and VOD in 2017 will generate $4.6 billion in revenue. Twitch was acquired by Amazon for $970 million and at present is the industry leader. 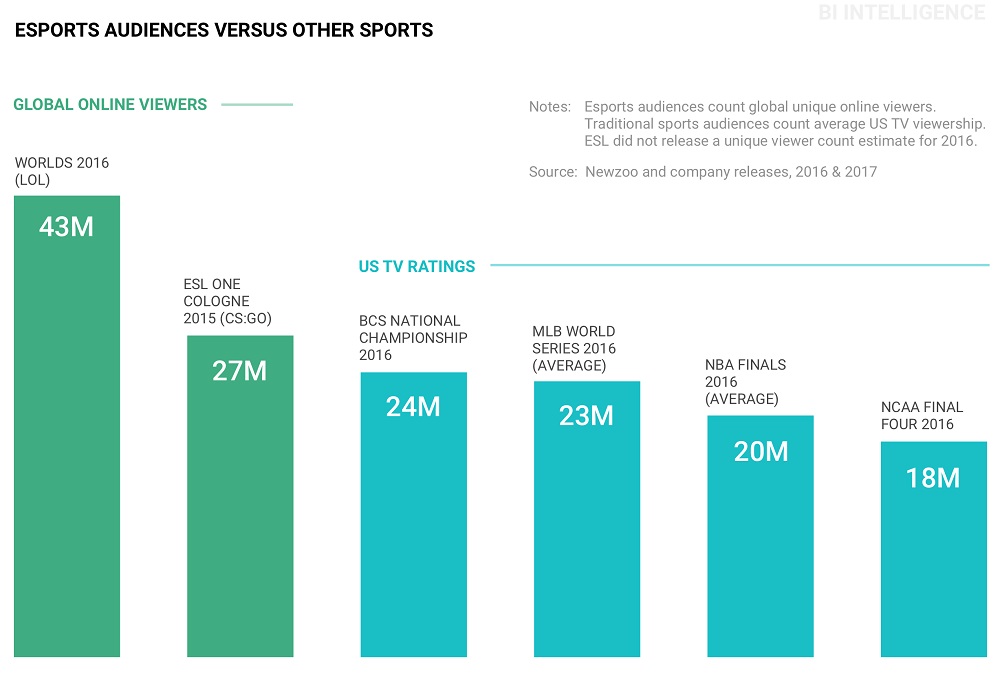 It’s fair to say that gaming and eSports markets have huge growth potential. Interestingly, Twitch.tv has been a market leader in both sectors, accounting for 70 to 80% of the global gaming market share according to various estimates. The development of eSports has been somewhat different in China. The market is by large divided between 5 companies – Douyu, Huomao, Zhanqi, Huya, XiongMao [PandaTV], QuanumTV. There is no established leader there compared to the other parts of the world.

Blockchain Technology Could Be A Game Changer In Esports 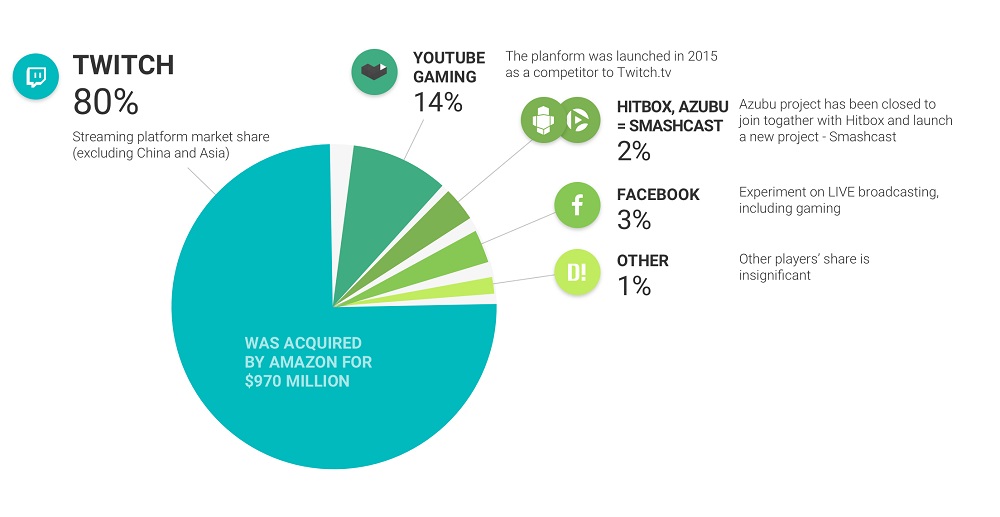 Video games and eSports markets, representing the largest part of the global gaming industry, have started to attract the attention not only of their core audience (gamers), but also of investors. The global market for video games has already surpassed that of the film industry, topping $105 billion in 2017. This should not be surprising given that the funds required to develop and release a video game is often on a par with the budget of a Hollywood blockbuster.

At the same time, the tremendous growth of cryptocurrencies and dissemination of blockchain technology suggests that there are opportunities to unite eSports entertainment with a blockchain-based solution. This would address a number of inefficiencies and offer unique advantages over conventional streaming platforms, whose features have remained virtually unchanged over time.

To date, more than 30 gaming industry projects have been launched that make use of blockchain technology, which is just a fraction of the vast number of token sales being launched daily, a figure which now exceeds 300 a month. It is evident that there is a gap in the market for a project that can unite blockchain with the gaming industry to create a solution that benefits all parties.

Providing a diverse set of features for a global gaming audience, Play2Live operates in both gaming and eSports markets. A new, blockchain-based and decentralized, video game and eSports streaming platform, Play2Live (P2L), is the first game streaming platform which brings eSports together with the cutting-edge of blockchain technology. Utilizing the Level Up Coin (LUC) and Level Up Chain, P2L offers a new level of interaction between game streamers and viewers. It allows audience and streamers to earn money and have fun.

The Pre-sale for the LUC token will start on November 20th, and go until November 26th. The token sale will begin December 4th and end December 10th. Your chance to get in early on the project starts soon! For more information visit play2live.