Q: Hi Keith, it’s been some time since we last spoke with you. What is the current state of the Open invention Network community?

A: Thank you. Last year, Open Invention Network celebrated its 15th anniversary. When it was formed, OIN’s mission was to promote the benefits inherent in the procompetitive collaborative development model at the heart of open source innovation, to build a community that would promote the sharing of core software innovation, and to protect the former by creating a ‘patent no-fly zone’ around core Linux and adjacent open source technologies.

Fifteen years ago, there was no template to follow to build a patent non-aggression community like Open Invention Network. As a result, OIN was created by very forward-thinking companies IBM, Philips, NEC, Red Hat, Sony, and SUSE (Novell), who were later joined by Google and Toyota as funding Members that recognized the potential of Linux and that by sharing foundational innovation, resources could be directed toward higher-value differentiation in the middle and upper layers of the software stack.

Currently, we have approximately 3,500 community members that span a spectrum of industries from Europe, Asia and the Americas. We have seen incredible growth from companies that have recognized the value of collaborative development and are looking to ensure that their adoption of open source software is safe from patent aggressors.

Q: OIN’s royalty-free cross license has been a key reason for OIN’s success. Has it changed over time?

A: The OIN cross license was and is fairly unique – and frankly, powerful. While OIN was founded by global technology companies, everyone has signed the same cross license when joining our community. By joining OIN, all community members are agreeing to engage in a cross license of patents that read on core OSS technology and, in so doing, give up their right to sue fellow community members on these technologies. There is no monetary cost to join OIN, and businesses that join are not required to own patents when becoming licensees. In many ways, joining OIN is a litmus test, demonstrating a company’s commitment to Linux and other key open source platforms.

What do you think is keeping technology vendors from joining the OIN?
Linux and open source generate so many touch points with the average person on a daily basis that it is difficult to count them. At this point, there are not many technology vendors that create products that leverage Linux and open source that are holding back from becoming members. For those that are in this category, it is largely because they want to reserve their right to sue on foundational open source innovations. If Microsoft recognized this and made the explicit decision to expose its 60,000 plus patents to potential cross license, one has to question how the remaining holdouts justify adopting core open source code that exposes them to litigation risk, when protection from that risk is offered for free through participation in the OIN license. 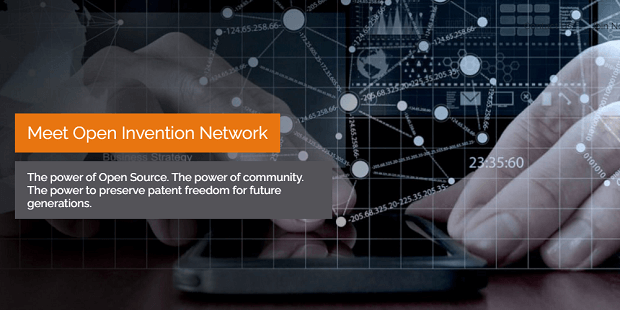 Q: What do you see as the biggest impediments or threats to the health of the open source community?

A: While the threat from aggressive operating companies still exists, and we continue our activities to limit these risks, many operating companies have recognized their dependence on OSS code is so acute that maintaining a portfolio of patents that read on core OSS functionality is cost-prohibitive and counterproductive. To a significant degree patent threats from practicing entities is being replaced by patent litigation risk from non-practicing entities involved in patent assertion.

In fact, the threat posed by these patent assertion entities was a major motivation for entities like Barclays and TD Bank to join our community, earlier this year. Over the coming months, you can expect to hear about more financial services companies joining our community and availing themselves of the patent risk mitigation programs we have deployed to thwart the efforts of these PAEs against core Linux functionality.

With the growth and adoption of Fintech, many financial services companies, which have historically relied on their technology vendors to shield them from patent issues, are increasingly concerned about PAEs. We are taking a very active role in addressing this issue because Fintech apps and platforms heavily leverage Linux and other open source code.

OIN pivoted, in the last two plus years since Microsoft joined our Community, to focus much of its resource on PAE risk mitigation related to open source functionality and, in parallel, has expanded the scope of our cross license to include key Blockchain, Kubernetes, Docker and Kafka open source technologies that are in widespread use in fintech and banking.

Q: What are you doing to address the growing threats from patent assertion entities?

A: There are a number of key initiatives that we can share publicly. For example, in late-2019, we partnered with IBM and the Linux Foundation to found and fund the Unified Patents Open Source Zone. Among a number of benefits, the Unified Patents Open Source Zone has greatly reduced the threat from granted patents held by PAE’s that read on OSS functionality. In addition, we provide prior art to companies at risk or in litigation. We are also one of the most active users of the third-party pre-issuance submissions programs designed to encourage the rejection or claim scope reduction of poor quality patent applications related to OSS functionality.

Q: Beyond the financial services sector, what industries do you think would benefit the most by joining OIN?

A: Over the years, we have had a substantial number of telecommunications service providers, handset manufacturers and broadband Internet equipment makers join our community. Given the continued integration of social media, Fintech and other platforms, we don’t envision a slowdown in “telecommunications” companies joining OIN.

Linux is the predominant platform-of-choice in the energy, utilities and motion control industries. From the network operations centers (NOC) all the way to the furthest distributed sensor, Linux and Embedded Linux power the platforms that enable companies to monitor and manage their assets. As the equipment and platforms for managing these systems becomes even smarter, we see a growing number of patent disagreements. These are the next set of industries most likely to see the inherent benefits of joining OIN, ensuring the freedom to innovate and operate open source-based solutions.