Below is our recent interview with Peter Pezaris, CEO and Founder of CodeStream: 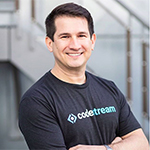 Q: Could you provide our readers with a brief introduction to CodeStream?

A: CodeStream is a free service that lets developers create annotated comments on their code, making it easier to ask questions and get answers to how things work. Those discussions are saved in a knowledge base, each linked to the code they refer to. We call these annotated comments codemarks.

Codemarks are living links between the discussions about your code and the location in your code it refers to. As the code changes, codemark technology allows those discussions to track those changes and keep the knowledge anchored in the right location. Codemarks can be shared, searched and filtered, helping developers understand and clarify code faster.

As a result, organizations can make better coding decisions that result in a more understandable codebase with fewer defects, deployed with greater velocity.

Q: What was the vision behind CodeStream?

A: We founded CodeStream because despite having worked in the communications space for over two decades, it was our observation that there was one audience in particular that had been left underserved: software developers. So we set out to fix that.

Today, development teams around the world track every change to every line of every file in their repository, all the way back to the beginning of time when the project was started. And yet almost all of those same teams are taking all the discussion about that code, which often explains how it all works, and are unwittingly throwing it away in Slack or Gmail, or burying it in a PR comment or Trello card, probably never to be seen again.

We believe that every piece of information about a codebase should be saved with the codebase, visible to every developer in the context of looking at a file or a function, at any time. This simple concept is, rather surprisingly, not implemented by any tool in widespread use today.

Q: For those unfamiliar with this subject, what is VS Code?

A: Programmers use a specialized editor, called an IDE, to write and edit code. IDE stands for Integrated Development Environment and includes components such as the editor, a debugger, and code intelligence tools. Visual Studio Code (VS Code for short) is a very powerful and popular IDE produced by Microsoft. CodeStream works an an extension to VS Code, and soon other IDEs, allowing developers to discuss or ask questions about their code without leaving their editor. It acts as a bridge between the IDE and other communication and developer tools, so there is no need for copying and pasting.

Over the coming months CodeStream will be be supporting extensions for numerous other IDEs. Very often developers working on the same project may actually be using different IDEs to edit code and it’s our plan to support as many of the IDEs as possible.

Q: You’ve recently raised $3,2M, could you tell us more about it?

A: We’re very happy to have raised a seed round from a great group of investors. We were part of the Y Combinator batch of Winter 2018, so as part of that amazing process, we were funded by YC. As you know, many YC companies such as AirBnb, Stripe and Dropbox have become quite successful, and we are proud to be part of the community and so we see their investing as a tremendous validation of our product idea and team. Other investors include S28 Capital and PJC, both of whom have been extremely supportive and great to work with. The investment will allow us to rapidly execute our product vision and roadmap across multiple IDEs.

Q: What is your main goal at the moment?

A: Having just released CodeStream Preview for VS Code our main goal right now is to get as much product feedback as possible from the software development community: both software developers and development leaders such as CTOs and VPs of Engineering. While in Preview, CodeStream will be free to use and evaluate and we’re looking forward to adding features and enhancements based on the feedback of our users. VS Code users can download the extension in the VS Code marketplace.