Below is our recent interview with BlockApps: 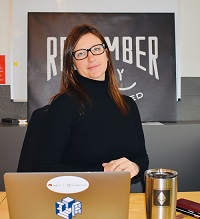 Q: Could you provide our readers with a brief introduction to BlockApps?

A: BlockApps is the leading provider of permissioned and private Ethereum blockchains, designed and enhanced to suit the needs of our enterprise customers. Founded in 2015, and the first company to be incubated out of ConsenSys in 2016, BlockApps coined the term “Blockchain-as-a-Service” with their blockchain platform STRATO. BlockApps delivered the very first enterprise blockchain application for one of the world’s largest mining organizations. The use case involved tracking the provenance of geological core samples and identifying who handled the core samples during their lifecycle.

BlockApps has separated itself from the competition through a network of powerful partnerships and technical attributes that make STRATO the most advanced blockchain platform to date. These attributes enable STRATO to create a network of scalable private chains, without the financial impact caused by other platforms. BlockApps has also enhanced STRATO beyond the Ethereum base chain by substituting out the computationally intensive proof-of-work consensus mechanism for one that allows for higher throughput without compromising on security. To make development quick and easy, STRATO has an advanced developer toolkit and a set of rest APIs that allow customers to integrate their blockchain application directly into their existing IT infrastructure with ease.

BlockApps has secured some of the largest tech partnerships in the industry. Our primary partners are Google, Microsoft, RedHat, and AWS, making STRATO the only blockchain platform that is cloud-agnostic among the major cloud providers. These partnerships help BlockApps’ customers by keeping the platform flexible for their development needs. BlockApps is also a thought leader in the enterprise blockchain ecosystem, having been an original founder of the Ethereum Enterprise Alliance (EEA) at the beginning of 2016. The EEA serves to develop ethereum enterprise standards; BlockApps’ CEO, Kieren James-Lubin, was elected to be the final approval of the EEA’s technical steering committee and was the main driver for the Enterprise Ethereum Architecture Stack released earlier this year.

Recommended: InvestoLand Raises $2,4M In A New Funding Round To Make Investing Easy And Accessible Worldwide

A: BlockApps is incredibly proud of our virtual private blockchain (VPB) solution, as it goes above and beyond anything currently available on the market. We released VPBs as a response to our customers’ growing demand for transaction privacy. When working within a consortium of enterprises, stakeholders want to be able to share and validate certain data in real time, while also obfuscating other data sets from irrelevant parties. This is a common roadblock to enterprises wanting to adopt blockchain technology as data privacy is of the utmost importance. Standard, public chains do not provide this privacy as any user can query the transactions of any other user on the network, and the existing private chain solutions are cumbersome, expensive, and do not scale.

Our VPB solution was designed to allow an unlimited number of private chains to be connected to a single node, keeping in mind the necessity for scalability as projects progress and grow over time. This means that customers aren’t required to spin up additional nodes in order to handle the load of the network, saving exponentially on cloud and operating costs, as most blockchain platforms become more expensive as they get larger.

What’s even more exciting is how simple our VPBs make it to integrate to the blockchain network. Most private chain solutions on the market require the users to open a new incoming node port for every private chain instance. Not only does this approach limit scalability to the number of available ports on the node, but it makes IT Security a nightmare. When an incoming port is opened it requires permission from the company’s firewall system in order to operate. This becomes nearly impossible to implement in most enterprises when some blockchain applications need to create millions of private chains (which is well beyond the limit of most solutions) and have them all manually approved to operate within the firewall. Instead, BlockApps designed our VPBs to transmit from a single port, simplifying the entire firewall process to a one-off request during development.

Another thing most private chain solutions fail to take into account is the fact that there a number of organizations, primarily financial institutions, who will refuse any firewall request for an incoming port for security reasons. This creates a serious problem, as many solutions rely on multi-port as their sole method of creating private chains. Due to BlockApps’ close relationship with many of the world’s largest banks, we were able to build our solution with a remedy in mind. In the event that an organization does not wish to establish an incoming port, there is a relay system built-in to our VPBs that will achieve the same results.

The management of these private chains is also a well known issue, as there is no easy way to add, remove, and permission the stakeholders that join the network. BlockApps VPBs were created with a built-in governance system, which was previously announced by BlockApps at Consensus 2018. This system makes it very simple to manage the permissions of the VPBs on-the-go and without having to relaunch any established private chains.

What’s more is that these are full private blockchains and not just state channels (off-chain transaction channels), meaning that the private blockchains can also call smart contracts privately. STRATO customers confidently operate and share data within these permissioned blockchains without the worry of vast complexities like operating costs, firewall permissions, and scalability.

Q: Can you provide some real world use-cases of your platform?

A: Airline Industry
1. Context & Objectives
– A BlockApps’ customer in the airline industry has a platform based on a legacy system and a highly centralized distribution model. They process approximately 500,000 transactions a day and constantly work to ensure that transactions sent from travel agencies and airlines are legitimate and that appropriate funds are moved to the right companies. Our customer then works to ensure that vendors have full control over their inventory. Because there is a huge amount of replicated inventory processed from multiple sources like airlines, travel agents, and aggregators, the settlement system becomes ripe with repetitive, inconsistent data and reconciliation issues. Subsequently, it slows down the process of sorting and verifying transactions. Combined with data inconsistencies, fees, which can come from aggregators and travel agencies, make flying more expensive for airlines and travelers.
2. Solution & Outcome
-The STRATO platform automates the customer’s settlement process, facilitating better audit and change management, more flexible ticket options, and easier ACH transfer file movement to various parties. By integrating blockchain technology into their settlement system, STRATO creates a standard, immutable, single source of truth for data, making the transaction process frictionless, easier, and faster to verify. As a result, it smoothes the settlement and management process for our customer, and reduces the need for airlines’ reliance on GDS companies for bookings.

Upgraded
1.Context & Objectives
-UPGRADED is an enhanced smart-ticketing solution which integrates with traditional legacy ticketing systems. Mobile ticketing is the most popular purchasing method for sports and entertainment events, and continues to grow. Mobile ticketing faces the growing problem of counterfeit tickets and fraudulent secondary market sales to unknowing consumers.
2.Solution & Outcome
-A smart ticketing system that leverages Ethereum’s smart contract functionality
-Use of BlockApps STRATO REST API for enterprise grade interoperability with existing systems
-UPGRADED completed pilot programs with various MLB and NBA teams and was the sole ticket provider for the Dream Bowl in 2017 and 2018
-UPGRADED has since been acquired by Ticketmaster in October 2018.

Q: Why is now the time for a technology solution like BlockApps?

A: Here at BlockApps we have created a standard process for identifying blockchain use cases within your enterprise. We offer executive blockchain education as well as blockchain development training in order to help our customers rapidly deploy their blockchain solution for a quick return on investment.

Being an industry leader, we’ve discussed use cases and have built applications that span across every industry. We have a first-hand look at the technology and the applications going live, and can say with confidence that this is the technology of the future. The biggest and most innovative companies of every industry are currently evaluating platforms and building applications, so if you want to ensure that your company does not lose its competitive edge, now is the time to learn.

For those that are interested in developing a blockchain application for their business, the STRATO platform is the most robust offering on the market:
Our team has extensive blockchain experience, having been in business for four years, and are considered to be some of the leading experts in blockchain technology. With several customers already running in production, and several more slated to go live in early 2019, BlockApps leads the way of blockchain platforms by offering a blockchain toolkit that makes it fast and easy for developers to deploy applications.

Our solution is also designed for maximum flexibility in order to help customers quickly and easily integrate their application into their existing IT infrastructure. As a partner of all of the major cloud providers, BlockApps can spin up on whichever cloud provider our customers use. Additionally, our set of rest APIs can integrate STRATO applications into any existing IT infrastructure and allow those applications to make calls directly to/from the blockchain.

Finally, our solution is built within the fastest growing ecosystem in the blockchain world. With over 30x the number of developers as the next blockchain, Ethereum is poised to become the leader in both public and private blockchain applications going forward. This is not only a sign of longevity for Ethereum, but enterprises can rest assured that the talent pool for developing applications on Ethereum is growing faster than any other blockchain.

A: Our short-term goals are focused on further improving the scalability of our platform, building on our innovations in consortium governance, and continuing to enhance the enterprise tools in our developer toolkit. By analyzing our customer needs across various industries, we are able to pinpoint the platform features that are required for most enterprise environments. We will also continue to grow our team and list of customers as we implement more production blockchain solutions. With a portfolio of high-profile customers BlockApps is positioned and ready to lead the charge of Ethereum in the enterprise.