If you don’t already own an iPad or you own an older iPad, then this is the tablet you should buy. Apple’s naming conventions haven’t exactly made it clear where this new iPad, which is simply called iPad, stands compared to the old Air 2 and most recent iPad Pro models. Essentially it is a cheaper and slightly updated version of the iPad Air 2. It’s starting from just $329. You get a 9.7 inch resonant display which is 25% brighter than the Air 2. It is also a bit faster thanks to the Apple A9 chip compared to the A8 which was in the Air 2. So it’s faster, brighter and supports split screen where you can have two apps running at once. But there have been a few compromises. It’s quite a bit thicker, at 7.5 mm versus 6.1 mm on the Air 2, and also weights 32 grams more. It’s not a big difference and it’s still a beautifully looking device. It has the same 8 megapixel rear and 1.2 megapixel front cameras, touch ID and home button, and Apple claims the battery lasts up to 10 hours. The new 2017 iPad sits somewhere between the iPad Air 2 and the iPad Pro. It has pencil support, smart connector, quad speakers, faster processor, colorful display and a great 4k camera. 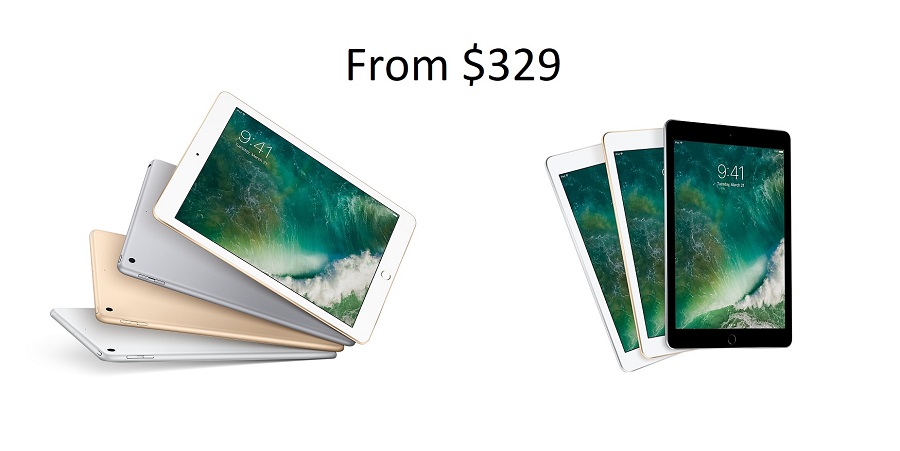 It comes in silver, gold and space gray and it starts at $329 for 32 gigabyte Wi-Fi model with 128 gigabytes of storage. So if you’re going to walk in the Apple store to buy an iPad, this iPad is pretty much the one you should go for, unless you want those premium features that iPad Pro offers.