Ivan Maryasin – co-founder of Monite – is in demand. He’s figured out a way for Fintech startups to get through the current VC downturn. 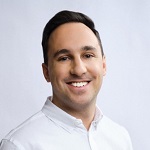 Ivan Maryasin has a solution for the large number of fintech startups currently looking around for a convincing long-term strategy.

These fintechs are victims of success. After an extraordinary influx of venture capital that climaxed in late 2021, the fintech world is now populated by a large number of startups focused on a single proposition that they do well. The problem they face is that they are not differentiated from any number of competitors, the most successful of which have already set off on a new course. They are creating so-called super apps by bundling more and more app capabilities onto a single platform.

The co-founder of Berlin-based startup Monite says that fintechs are seeking to attract customers by adding super app functionalities. “It’s a logical decision,” he says, “but the problem is they are tackling the task themselves, one app at a time. That’s slow, expensive and simply doesn’t solve the core challenge of how to look radically different from competitors.”

No need to reinvent the wheel

By providing a solution to this crisis, Maryasin is positioned in an enviable position in a market desperate for answers. Under his high-energy leadership, Monite is transforming the entire fintech industry. It is already preparing to go live with a number of high-profile customers, and is in talks with over 100 more platforms across the US, UK, and EU.

Maryasin is one of the top proponents of an approach called “embedded finance”. Rather than each digital marketplace, bank, or SaaS provider kicking off its own two- or three-year internal development program, embedded finance enables them to simply take in short lines of code known as APIs into their interface.

What’s happening right now, is that fintechs are burning through what remains of their VC funding to reinvent the wheel. It’s a notoriously risky and expensive process. Just to get started you need the right people and specialists are still hard to find. Rates are pushing northwards all the time – even with the current downturn. And, if you can get through the skills hurdle, there is no guarantee of success.

“Outsiders sometimes imagine that running a software development project is a matter of setting objectives and deadlines and then harvesting the required apps on the appointed day”, notes Maryasin. “Anyone who has been responsible for a project will tell you that the reality is delays and compromises all the way. If you even get to a viable end product – and many projects don’t – it’s likely to provide a fraction of what you originally hoped for.”

Recommended: An Interview With Cindy Truong, Co-Founder & CEO At Society of Saleswomen

But the real-world challenge is even bigger than that. Adding one new app no longer differentiates a fintech in a world of super apps.

In banking, for example, Monite has built a layer that connects its apps to any bank account. It means that a neobank can now have exactly the same functionality as the best new bank on the market.

His second insight is that, in the rush to create super app breadth, fintech’s must not sacrifice what makes them distinctive. For example, Monite offers the tools for neobanks, like Penta, to offer more than just banking. But it’s critical, in Maryasin’s view, that these tools do not mess up platforms’ interfaces, because that’s one of the key reasons customers sign up to banks like Penta in the first place: they specifically choose something different from the legacy banks.

Any fintech can access Monite’s layer and add its automation capabilities to its own interface, just by embedding the relevant APIs. “For a startup struggling to differentiate itself or keep up in the rush to create super apps, Monite provides near-instant breadth, presented to the end user as entirely within the startup’s own interface and branding. Why would you struggle to develop this yourself, when you can get it in a couple of weeks?”

The third advantage of Maryasin’s approach to building super apps is that startups can offer their users end-to-end automation of entire processes – rather than point solutions that do just one thing.

Take finance automation, for example. While at Penta, Maryasin realized that what small businesses needed most was the ability to handle their finances more easily. Freelancers and established small- and medium-sized companies still waste thousands of hours per year on routine business admin and accounting, as well as analyzing their more complex financial needs like financing and working capital.

Automation of these tasks is happening, but it has been focused on building best-in-class solutions for a specific problem. For example, Expensify for expense management or Bill.com for bill pay. While these players solved one problem well, entrepreneur end-users usually ended up with automation in one place but close to nothing in others.

Neobanks typically address accounts only, not process automation, leaving entrepreneurs to do the monkey work. Monite automates the drudge with one platform for end-to-end processes for invoicing, expense management and payments. Indeed, any B2b platform can now add compliant invoicing, payables automation, or expense management workflows into their interface via a single API in 3-5 weeks and become one-stop-shop solutions for their clients.

The one to watch

Maryasin’s rise to prominence in fintech was predictable. He founded his first business at just 15 and today boasts expertise in startup growth in Silicon Valley and Europe. He has brought this energy to different roles at different companies, from pre-seeds, to a YCombinator incubatee (now a unicorn), and to a profitable Series B.

Under his leadership, Monite has raised a total of $6.3 million in funding over two rounds. Its backers include P72 Ventures, Runa Capital, Tomahawk VC, and founders and execs from companies who know what’s what in embedded finance, including Mollie, Klarna, Paypal, Plaid, and Square.

Monite’s addressable market is gigantic. Embedded APIs are now recognized as the way forward. As competition for customers gets tougher, and as investment capital gets harder to raise, most serious platforms are abandoning self-build in favor of embedded finance. With a solution to the challenge facing fintechs today – how to remain relevant at a time when competitors are transforming their offers – Maryasin’s Monite is the one to watch.